You can order your copy of Lionel Walfish's Lillian on Sunday: Stories of the Human Heart from most major online book retailers.
​​
Direct from the Producer
FriesenPress

"Mr. Walfish is a master of the written word."
–  Catherine Beeman, reviewer, Your Book Group

"His ability to tell the tale, with the minimum of words, is unrivaled."
-K.J. Walker, author on Booksie

"This collection is thought-provoking...I am impressed with how quickly the stories developed, with how deep a story can go so quickly."
– Tyler Baker, reviewer, Books and Stuff Reviews

"The characters and the truths are all universal and ageless."
– Nicholas Cochran, author of Fatal Flaw 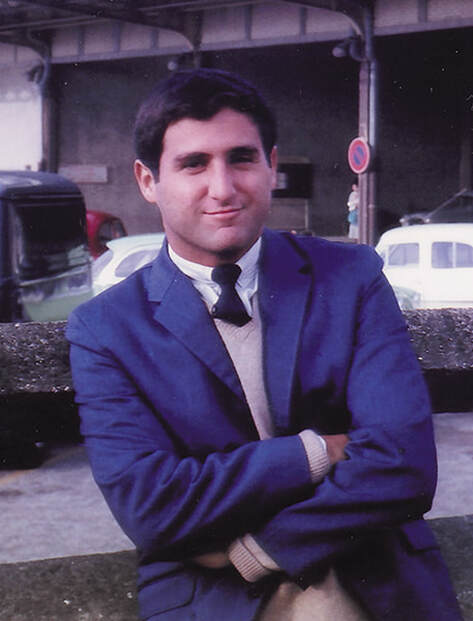 Paris, 1963
Lionel Walfish has lived in Montreal, Manhattan, Paris and Toronto. He began his writing career in Montreal working with the advertising department of Steinberg's grocery store, where for several years he shared fun times and jokes over lunch each day with a very young and talented Doris Giller, long before she became a pioneering female journalist and namesake of the Scotiabank Giller Prize. She and Lionel used to compete to see who could tell the funniest stories and, of course, Doris always won.

Later, Lionel entered the world of high fashion when he moved to Manhattan and landed a job as personal assistant to designer Anne Klein. Hiring him for his good looks, Anne taught him, among many things, how to make the perfect martini to serve at her extravagant parties, and how to dance the peppermint twist so he could accompany her to the trend-setting Peppermint Lounge (the precursor to Studio 54) where  together they made a nightly sensation. A quick relocation to Paris saw Lionel further developing his skills as a fiction writer which he used two years later when he returned to Canada and was hired to write scripts for television.

A recurring motif throughout Lionel’s life has been his startling chance encounters and interactions with some very famous celebrities from the past…riding alone in an New York elevator with an agitated Marilyn Monroe as she  murmured, “Oh, I am so late—what will they say?,” and then later seeing her sing "Happy Birthday" to J.F.K. that same night on the television (after being introduced as the 'late' Marilyn Monroe)…coming eye to eye with a towering Rock Hudson smiling down at him in the aisle of Carnegie Hall during the intermission of Judy Garland's "Concert of the Century," and then being jostled by him gently in order to get by...asking a familiar looking older gentleman seated next to him in Hawaii, “Excuse me, sir, do you know the Walfishs of Montreal?” followed by the man’s response, "No, son, but your parents might have seen me in their living room—I’m Jack Benny.”

Throughout his career in advertising, fashion design and television, Lionel has always pursued a life-long passion for short-story writing. His stories have won several awards with the WILDsound Writing Festival in Los Angeles and Toronto and have appeared in the anthology, The Ronin Express.  His book, Lillian on Sunday,  illustrates his mastery of the craft as well as his deep understanding of the beauty, pain and humor locked in every human heart.
To download and read the Q & A with Lionel Walfish, click here.

Connect with the Author

For questions, requests, and media enquiries, please submit your details below and we will get back to you soon. Thank you.